This building is a valuable addition to the architectural highlights in Münster - and there are many. The Philosophikum, which houses a library, an institute of humanities and university research facilities, was one of the largest construction projects of the University of Münster.

The design of the facade proved to be a real challenge, as it was essential to connect the historic building stock with the new building and at the same time preserve the character of both. quick-mix experts and quick-mix building materials played a major role in achieving the final, striking appearance. The light sand-coloured facade gives the Philosophikum an unmistakable character. Peter Böhm - who won the architectural competition in 2010 - stipulated that the red clay brickwork typical of this region should be whitewashed with a mixture of trassic lime plus selected fine powders and granules. The façade of the new building therefore refers to the surrounding structures, such as the nearby episcopal buildings and the Fürstenberghaus, which houses the university's lecture halls. The Philosophikum has become an imposing structure that does not look out of place among its historical neighbours - quite the contrary. Viewed from the centre of the cathedral square, it offers the observer an interesting architectural mix. 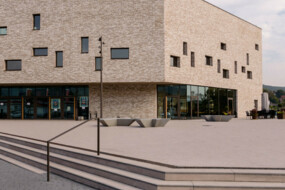 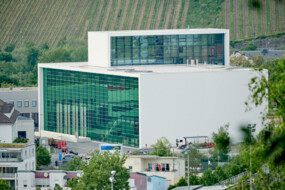 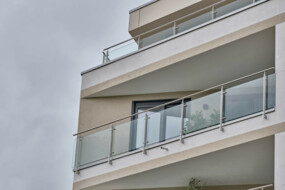