Lübeck’s Travepromenade was already an attraction as a building site.

The 550 m long promenade in Lübeck-Travemünde is held securely with tubag products.

Lübeck-Travemünde (jm) – It’s a great feeling when a new tourist attraction is drawing visitors before it’s even finished. That’s what happened at the Travepromenade site in the highly popular tourist destination of Lübeck-Travemünde on the Baltic Sea coast. Because whenever the crew from ASA-Bau were laying the large-format concrete slabs for the new promenade one by one with their excavator over the previous months, children and adults alike stopped to peer over the site fence to see exactly what was going on. Working in two phases over a length of 550 m between Kaiserbrückenplatz and Fährplatz directly on the northern bank of the River Trave, the team under site manager Christian Ventzlaff and supervisor Marcel Holtz laid Travemünde’s new showpiece: the Travepromenade. Both the large-format concrete slabs and the small-format stone paving on either side are now held together by a system that besides the bedding mortar, also includes the TNH trass bonding slurry and the PFH-light paving joint grout from tubag – the Sievert SE premium brand for horticulture, landscaping and roadbuilding products. Following a construction period of 14 months, the new Travepromenade in Lübeck-Travemünde is now ready for strolling and lingering again. 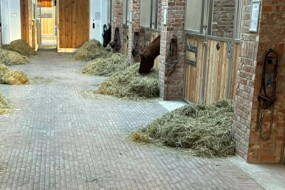